Designed by Yukio Hashimoto and decorated by the wonderful local artists as Rurian Glass, every design and product that adorn Ray are rich with the heritage of the Goto Islands and Nagasaki. Refined by the hands of dedicated craftsmen who have inherited and honed the skills of the past, to bring them into the future, and to show our guests the unspoken beauty of the region.

Designed by Yukio Hashimoto and decorated by the wonderful local artists as Rurian Glass, every design and product that adorn Ray are rich with the heritage of the Goto Islands and Nagasaki. Refined by the hands of dedicated craftsmen who have inherited and honed the skills of the past, to bring them into the future, and to show our guests the unspoken beauty of the region. 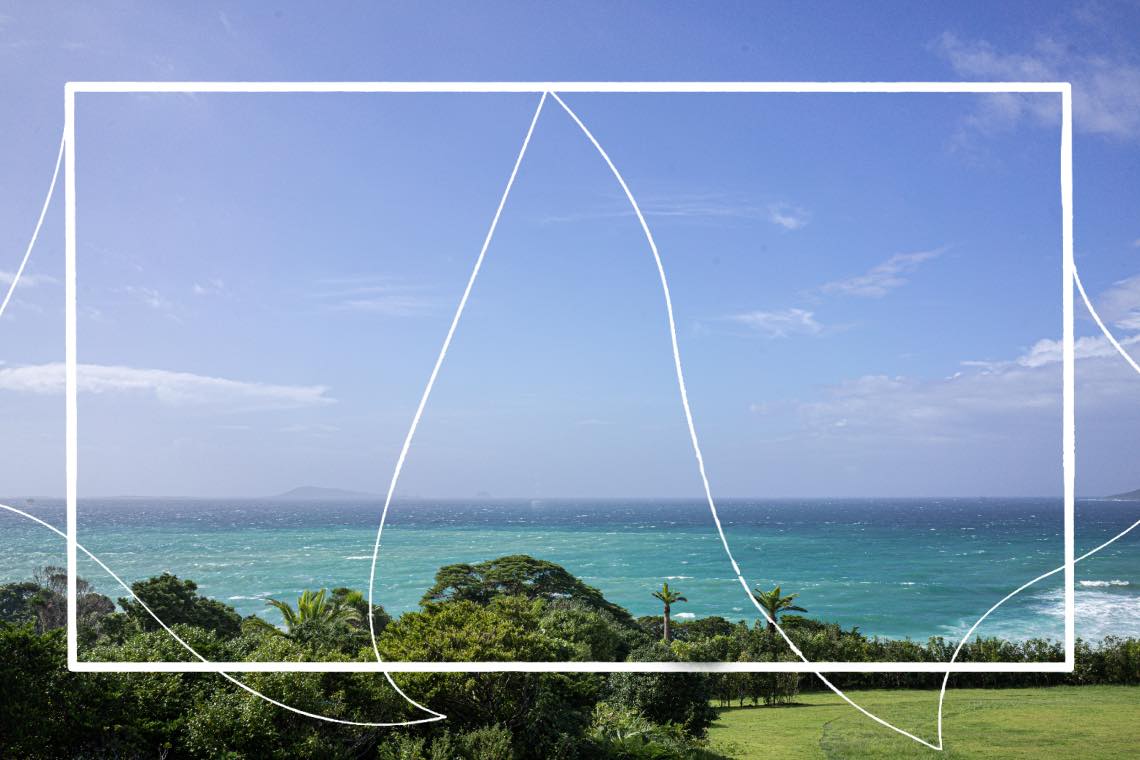 That was what designed Yukio Hashimoto chose as his theme, as he designed and decorated the interior of this hotel.
The azure sea that stretches on towards the horizon without end, the sea breeze that flows through your very body.
Here, center stage is nothing but the everchanging and ceaselessly moving nature of Abunze.

The sea of Goto, the winds of Goto.
Resonating, harmonizing with the islands.
Together, with nature.

Throughout the building, the ripples shimmer on the sea project themselves inside.

Here, we welcome our guests. With walls of dulled mirrored aluminum and a large resin top table, allowing the outside world to step foot indoors with you, as the sights and colors of the days’ sky paints itself against the walls.

In the approach, and in some of our rooms, water basins cast twinkling ripples across the walls and tunnels, creating an ephemeral tunnel for you to pass.

A piece of history, recreated and refined.
Shining jewels that connect workshops and community.。

A piece of history, recreated and refined.
Shining jewels that connect workshops and community.

When Nagasaki opened her ports in 1570, the area flourished as a Portuguese trading port, its streets filled with Churches and churchgoers, and busy merchants importing their goods, namely, stained glass.

Here, in collaboration with Rurian, local glass crafters from the area where Japanese glass culture first began, we produced glasses and vessels for our guest rooms and restaurant. Delicate, gorgeous, these works catch the light and turn it into something more. But don’t be satisfied with just words–take them into your own hands and feel for yourself.

Tradition, heritage, and the modern. 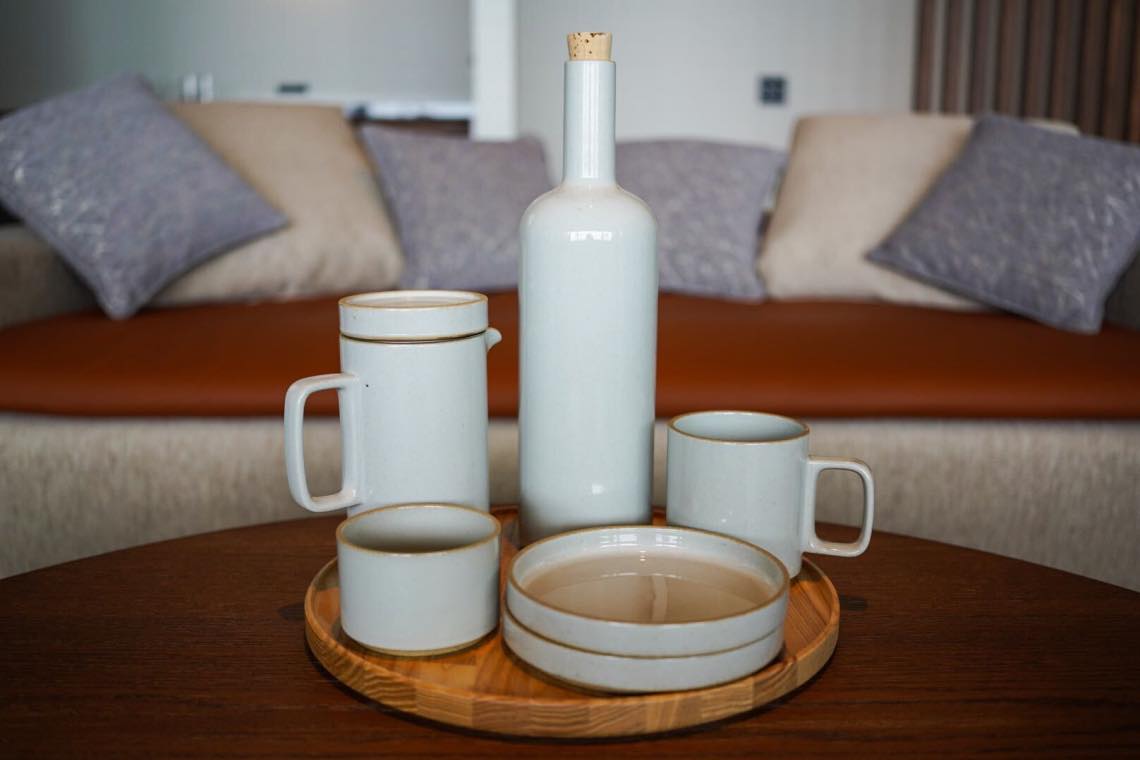 Tradition, heritage, and the modern.

The Kodama family has been a family of ceramists for many generations. Based in Hasami-cho, Nagasaki, their humble beginnings start with a mere pottery cart in the year of 1946, just after World War 2, and 11 years later they established Saikai Pottery. To this day, they carry on their legacy and tradition, creating works of functional art.

The Hasami Porcelain we use in our guest rooms was created in collaboration between our designers and Saikai pottery, sublime works to accompany you on any occasion.

On the northern tip of the Goto Archipelago is the small Ojika Island. And on that island is Shinkosha, a letterpress that’s been in business for over a hundred years.

The letterpress stands alongside the compass and gunpowder as one of the three greatest inventions mankind has ever made. Letterpressing is a technique unique to the past, where heavy plates made of stamps and steel are pressed to paper, creating letters and words. The product is uneven to the touch, imperfect, and utterly unique. The mere touch conveys the weight of time, and effort.

Today, the fourth generation owner of Jinkosha runs a workshop named OJIKAPPAN, and is hard at work at conveying the charms of the letter press to the modern man. In collaboration with him, and OJIKAPPAN, we’ve created an original letter set, for you to fill in and send off to the future.

On the letterhead is engraved Mt. Onidake and the starry sky, as seen from our hotel, as well as “goto.” A truly one-of-a-kind design, that can only be done justice by a letterpress.

Artwork crafted from stone,
and stone given form by lava.

Artwork crafted from stone,
and stone given form by lava.

Adorning the interior of our hotel are lava stones, excavated from Mt. Onidake. Once free flowing rivers of lava 50,000 years ago, these now stones have transformed into the foundation that supports all who live on the Goto Islands. Each piece handcrafted by Arikawai Stone.

At the entrance stands the last stone to be excavated. Cut boldly, the stone now bears a new face. A new future for an old past. What it reflects through its crystals is you, but also so much more.

Descending upon Abunze
The Ladder of Angels 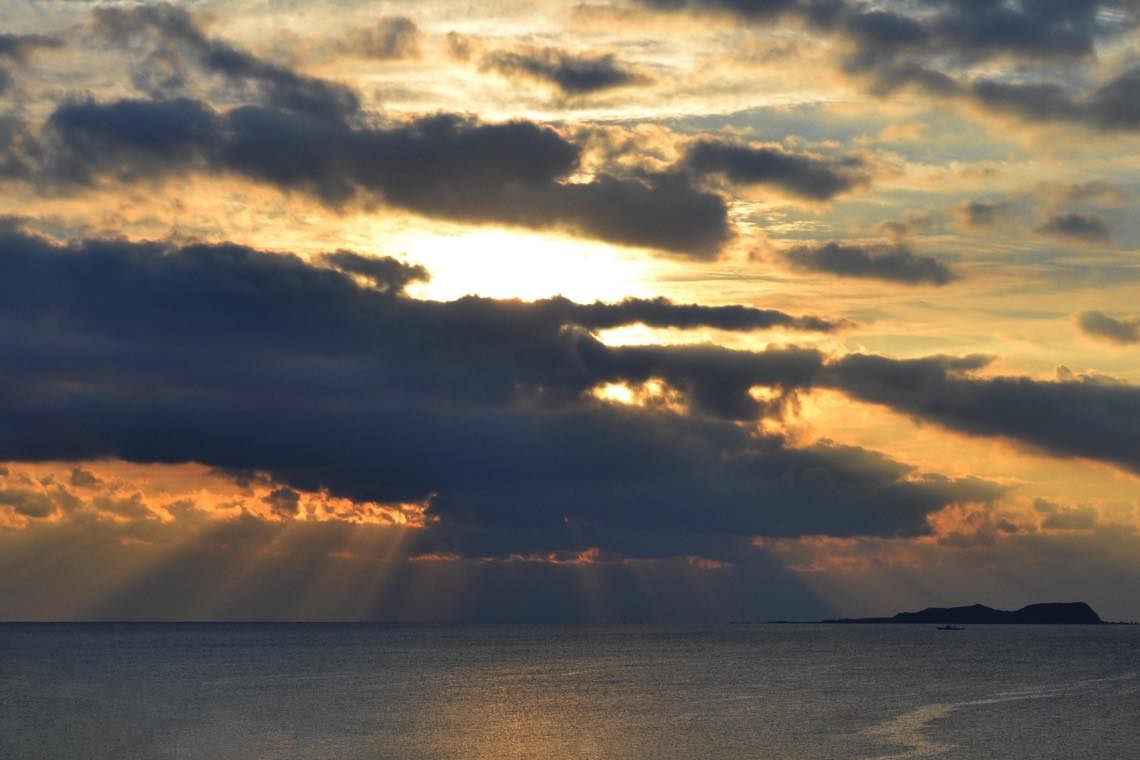 Descending upon Abunze
The Ladder of Angels

Three photos are displayed on the premises, each depicting the view of Abunze from where the hotel stands. Through thick clouds, light spills through, brilliant as it pierces through the sky towards the sea, as tranquil waters below shimmer. This phenomenon is called the angels ladder, the name originating from the Book of Genesis in the Old Testament. It is said that Jacob saw in his dreams a stairway unto heaven, from which angels came and went. Author Kenji Miyazawa in his poem Farewell, has described the sight as being “an organ of light.” and it has always evoked unto all who see it a deep sense of mystery and beauty. In the unobstructed sky and seas of Abunze, the sight is all the more awe-inspiring.

The traditional and the modern
Innovation and tableware 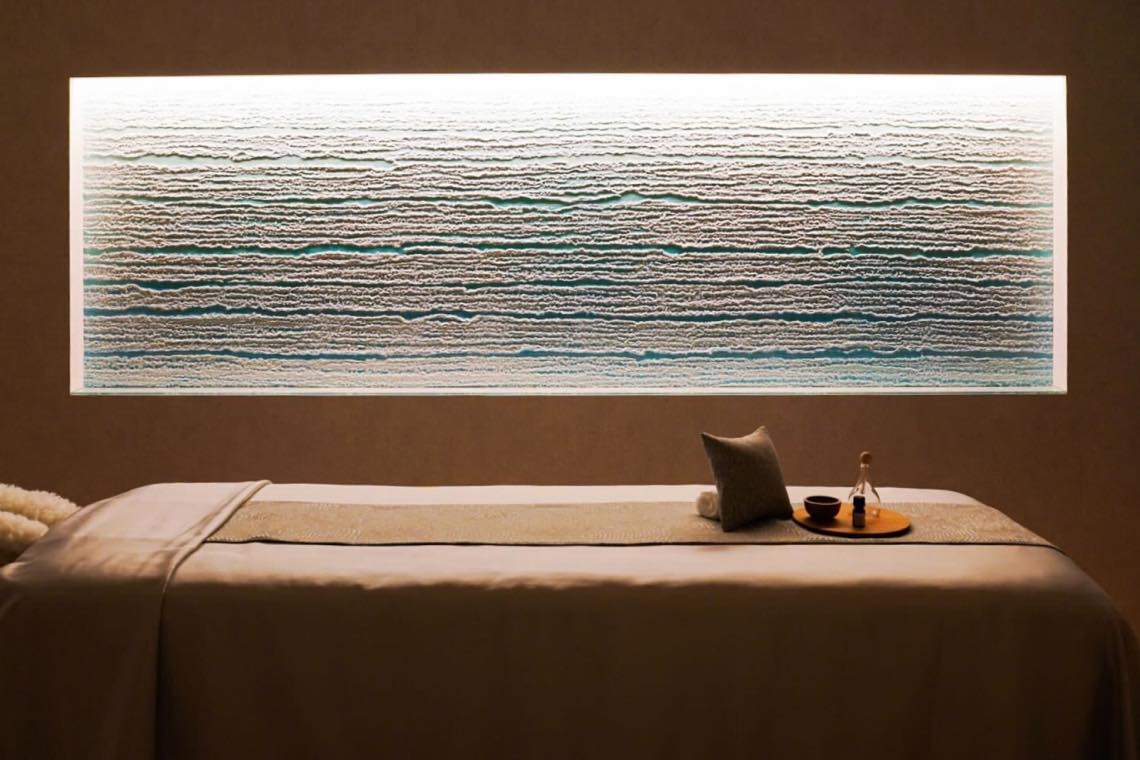 The traditional and the modern
Innovation and tableware

To express the sea of Goto, designer Yukio Hashimoto elected to use washi, traditional Japanese paper, and a special paint that cracks naturally as it dries. This process, uncontrollable by man, creates a work of art, that encapsulates the sea, the sky, the Camellias that bloom on the island, in a singular organic and truly free manner, as befitting the Goto Islands.